The Armenians in Singapore, who numbered around 100 families at their peak in the 1880s, have now moved on or become part of the wider Singapore community. The Armenian Apostolic Church of St Gregory the Illuminator on Armenian Street, the first church ever built in Singapore, remains today.

By the 18th century, Armenian communities had established themselves in India (particularly Kolkata) Myanmar, the Malay Peninsula (particularly Penang and Malacca), and Java. Armenian trading firms such as the Aristarkies Sarkies Company (1820-1841), Apcar & Stephens Company (1826-1845) and Mackertich M. Moses Company (1821-1845) were prominent in Singapore’s economy. By the 1830s, Armenian merchants began investing in land. Built in 1835, in March 1836 the Church of St Gregory the Illuminator was consecrated, making it the first church in Singapore.

The 1931 census showed 81 Armenians. Many of the Armenians, as British loyalists, were interned during World War II. By the 1950s, much of the local Armenian community had emigrated to Australia or become part of the larger communities in Singapore. However, during the Feast of the Epiphany, the flags of Singapore and the Republic of Armenia are raised at the Armenian church.

Catchick Moses (Movessian) (1812-1895), was a co-founder of the Straits Times, which was to become the national English newspaper, in 1845. He sold the paper a year later because it was unprofitable. Catchik Moses died in 1895.

The Sarkies brothers (Martin, Arshak, Aviet and Tigran) founded the Raffles Hotel and several other hotels in Southeast Asia

Agnes Joaquim was born in Singapore, on 7th April 1854. As the eldest daughter in her family, Agnes helped her mother raise her 10 siblings after her father died. She never married, dividing her time between the Armenian Church of St Gregory on Hill Street, and her horticulture work in her garden in Tanjong Pagar. In 1899 at a flower show, Agnes unveiled the Vanda Miss Joaquim for the first time, and won the $12 first prize for her flower. As she was suffering from cancer at that time, Agnes died 3 months later at the same year, at the age of 44. In 1981, the Vanda Miss Joaquim was designated Singapore’s national flower. Her tombstone stands in the Armenian Church in Singapore and reads: In loving memory of Agnes, eldest Daughter of the late Parsick Joaquim, Born 7th April 1854 – Died 2nd July 1899,’Let her own works praise her. Nothing in my hand I bring, Simply to Thy Cross I cling’

Armenian expatriates in Singapore include Ashot Nadanian, who has coached the Singapore National Chess Team since 2005 and Gevorg Sargsyan, conductor of Singapore Camerata Chamber Orchestra and Tanglewood Music School since 2008.

The Vedas, the ancient scripture predating the religious scripture of all other commonly practice religions today, was recited in Sanskrit. The tales told through the scripture perfectly preserved orally by Brahman monks today speak of the beginning of Indian heritage, in which the Sanskrit speaking peoples followed their god across northern India and into the lands they inhabit to this day. These people were known as Aryans, meaning the civilized/enlightened. In the 1800’s an immense discovery was made that showed a link between Sanskrit, Latin, Greek, and most especially, Welsh. The earliest transcribed manuscripts of the Vedas told stories that had been passed down from over 2500 years before that. These spoke about the god Indra, who brought down thunder and rain, and a society in which chariots drawn by horses were not only common but very much a symbol of their culture. India does not have horses native to its lands. There are pieces of evidence that point to eastward migration. The settlements were on the Indus river, which gave India it’s name. Changes in rives flow and climate change led to the migration of the people. Turkmenistan was also where an ancient city was uncovered where horses were sacrificed by Aryan kings and chariots buried in the Kings’ mausoleum. Tracing these connections to Armenian known history, it’s not a far-fetched theory to suggest that what was once known as the Armenian Highlands was the birthplace of the infamous Aryan race.

The national coat of arms of Armenia consists of an eagle and a lionsupporting a shield. The coat of arms combines new and old symbols. The eagle and lion are ancient Armenian symbols dating from the first Armenian kingdoms that existed prior to Christ.

The shield itself consists of many components. In the center is a depiction of Mount Ararat with Noah’s Ark sitting atop it. According to tradition, the ark is said to have finally rested on the mountain after the great flood. Ararat is considered the national symbol of Armenia and thus is of principal importance to the coat of arms. Surrounding Mount Ararat are symbols of old Armenian dynasties. In the lower left portion of the shield, there are two eagles looking at each other, symbolizing the length of the Armenian territory during the reign of the Artaxiad Dynasty that ruled in the 1st century BC. In the upper left portion, there is a lion with a cross, the emblem for the Bagratuni dynasty that ruled during the Middle Ages, between the 7th and 11th centuries. Under this dynasty, Armenia blossomed culturally, making its capital, Ani, one of the most important cultural, social and commercial centers of its time. Bagratuni was destroyed by the Byzantine Empire’s encroachment and by Seljuk conquests in the 11th century. In the upper right portion, there is a two-headed eagle, the emblem of the first dynasty to reign over a Christian Armenia, the Arsacid Dynasty of Armenia. Tiridates III of Arsacid Dynasty made Armenia the first Christiannation in 301. This dynasty ruled from the 1st century to 428. In the lower right portion, there is a lion with a cross, the emblem of theRubenid dynasty. This dynasty reigned in Armenian Kingdom of Cilicia, a state that expanded and prospered during the 12th and 13th centuries, until the Mamelukes and Turks eventually conquered it.

Both of these animals were chosen because of their power, courage, patience, wisdom, and nobility in animal kingdom. 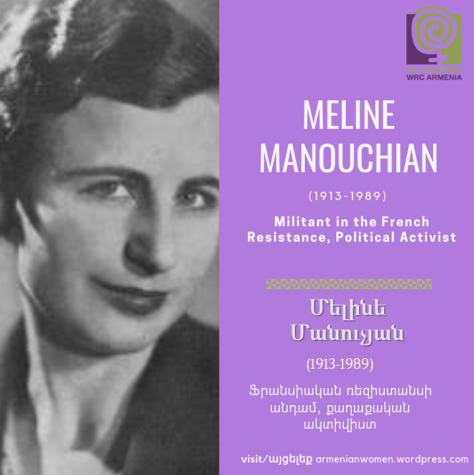 Meline was born in 1913 in Constantinople – her maiden name was Asadurian . During the Genocide of 1915, at the age of 4 she lost her parents and ended up in an orphanage in Greece.

In 1926, the orphanage moved to Marseille and Meline continued her school there.

After graduating from high school she moved to Paris where she met her future husband the militant, Missak Manouchian. She was very active in the local Armenian community.  In 1938, she was elected as head of the Armenian French Democratic Union.

When the war started in 1939, and the Nazis occupied Paris, Melinee joined the French Resistance and started the struggle for freedom. She was responsible for secretly disseminating information and literature against the Nazis. She was often posting flyers and political pamphlets on the walls of residential buildings urging citizens to stand up…

Dame Sian Seerpoohi Elias, born March 13, 1949, is the 12th and current Chief Justice of New Zealand, and is therefore the most senior member of the country’s judiciary. She is the presiding judge of the Supreme Court of New Zealand. As Chief Justice, she also acts as the Administrator of the Government (acting Governor-General) when the position of Governor-General is vacant or if the Governor-General is overseas. Elias has held the position of Administrator of the Government from March 22, 2001 until April 4, 2001, and again from August 4, 2006, until August 23, 2006.

Born in London in the United Kingdom of an Armenian father and a Welsh mother (hence her Welsh forename and surname), Elias attended Diocesan School for Girls in Auckland. She completed a law degree from the University of Auckland in 1970, and then undertook further study at Stanford University. She took up employment with an Auckland law firm in 1972, beginning her career as a barrister three years later. She also served as a member of the Motor Sports Licensing Appeal Authority and of the Working Party on the Environment. She served as a Law Commissioner from 1984 to 1988. Elias is also known for her work in relation to various Treaty-related cases. In 1990, she was awarded a New Zealand 1990 Commemoration Medal in recognition of her services.

In 1988 she and Lowell Goddard were made the first women Queen’s Counsel in New Zealand.

Elias is married to Hugh Fletcher, former CEO of Fletcher Challenge and a former Chancellor of the University of Auckland.

Elias became a judge of the High Court in 1995, and occasionally sat on the Court of Appeal.

On 17 May 1999, she was sworn in as Chief Justice of New Zealand, the first woman to hold that position in New Zealand. When the government announced plans for the establishment of a Supreme Court (replacing the Judicial Committee of the Privy Council as the final court of appeal in New Zealand), it was decided that Elias, as Chief Justice would automatically be appointed to the new body. The Supreme Court commenced sitting in the middle of 2004.

In July 2009 Elias caused controversy with her speech for the annual Shirley Smith address to the Wellington District Law Society, arguing against what she described as the “punitive and knee-jerk” attitude towards the criminal justice system. In response, Minister of Justice Simon Power said that it is up to the Government to set sentencing policy and judges to apply it. Sensible Sentencing Trust’s Garth McVicar stated Elias should resign because of her stance, but academics and lawyers lent support to the points raised in her speech.